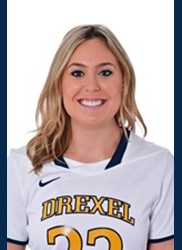 Rachel is really excited to coach for Philly Blast this season. She is a senior defender at Drexel University under Coach Jill Batcheller and is going to graduate in June 2020. She currently works as a New Initiative and Strategy Co-op at Cozen O’Connor.

HS: Twice a Second Team All-Delco and All-Central selection…helped Garnet Valley to a pair of PIAA State Championships in 2014 and 2015…the team also captured the Central League title in 2014…participated in the 2014 Under Armour Uncommitted Games and the 2015 Under Armour Underclass Games…named a Fab 40 All-Star at the Philly Showcase…a three-sport varsity athlete who also played soccer and basketball…named a 2015 Honorable Mention All-Delco student-athlete in soccer.