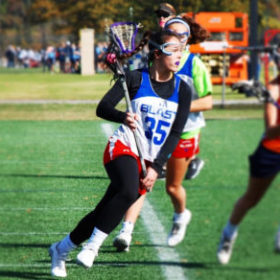 Congratulations to Philly Blast 2018 and Radnor High School midfielder, Carleigh Goldstein, on her verbal commitment to play Division I lacrosse at Elon University!

Elon is a private liberal arts university located in North Carolina, just outside of Greensboro. The Elon “Phoenix” compete in the NCAA Division I Colonial Athletic Association against Delaware, Hofstra, James Madison, Drexel, Towson and William & Mary. The women’s lacrosse program at Elon began just a few years ago in Spring 2014. Each year, the team has grown stronger under Coach Josh Hexter’s direction. Last season (2016), the Phoenix finished 10-7 overall, advanced to the conference semi-finals and ended nationally ranked #31 by Laxpower. The decision to choose Elon was clear for Carleigh: “I fell in love with the school the first time I visited, and I feel like its a perfect fit academically and athletically. The team camaraderie and Coach Hexter’s philosophy are really important to me, as well as the unique educational opportunities offered.”

Carleigh is the ninth Blast 2018 player to verbally commit to playing lacrosse in college, the seventh at the Division I level. She wants to remind players beginning the recruiting process “to remember to have fun at prospect day and visits, even though they can be stressful…. everyone has their own recruiting timeline and everything will work out if you dedicate time and effort.”

In addition to being an accomplished lacrosse player at Radnor High School, Carleigh is also a 3x varsity volleyball team member (2x All-league) and also dedicates her time to the Michael Breschi Foundation, Best Buddies and the Speak Up program.