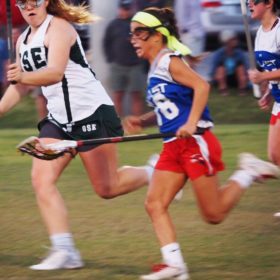 VCU is a public research university located in the heart of Richmond, Virginia.  The university is ranked as the #1 public graduate arts program in the country and VCU’s Medical Center is the No. 1 hospital in the Richmond metro area, with two programs ranking in the top 50 nationally.

“I chose VCU for many reasons. First, I love the city of Richmond. Academically, they have a wide range of majors to choose from. Athletically, they are starting a new women’s lacrosse program and I am excited to help contribute to building that program. The coaches are AWESOME and really energized about the future of VCU’s lacrosse team,” George reports.

In addition to playing lacrosse for Philly Blast 2019 and for Penn Crest’s Varsity Lacrosse Team, Juliana is also a member of the varsity soccer program and earned the Top Scorer Award (2016).