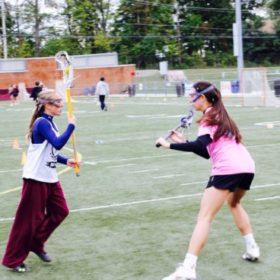 Twenty teams in Grades 5 through 9 participated in the Stoga 5v5 Lax Fest on Sunday, October 4th, a clinic and small-sided tournament hosted by the Lady Pioneer Booster Club and the Conestoga Girls’ Lacrosse Team.

The Minions were placed in the 9th grade bracket and competed against Quix Stix Blue, Quix Stix Green, and PA Pride. The 2019s dominated the division, going 5-1 on the day… only losing the 2nd time around to Quix Stix Blue by one goal in the final minute of the game. The team played a fast paced passing game and many different players found the back of the net throughout the tournament. Margaret Allen (goalie) had an outstanding day in cage and proved to be the defensive MVP for the Minions!

Blast 2020 was entered into the 8th grade bracket where they faced Quix Stix Silver, Panthers (Haven), NXT 2020 and Envy 2020. The 2020s also dominated their bracket, losing only one time to NXT by a single goal in the final seconds of the match. The 2020s played incredible defense and held their opponents to very low scores in each game. Roz MacDonald (goalie) was stellar in cage and posted multiple saves each game, coming up huge in many games.

Many other Blast players competed at the event as well, including players on the Quix Stix teams as well as the Jags 2022 (GV) team. During the clinic portion of the tournament, Molly May set the record for the day on the fastest shot contest with 60 mph!!