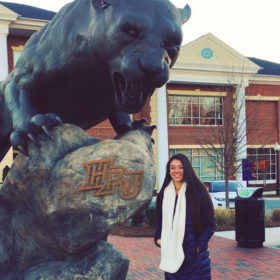 Congratulations to Philly Blast 2019 and Garnet Valley defender, Devin Taulane, on her verbal commitment to play Division I lacrosse at High Point University!

High Point is a private liberal arts university located in North Carolina, just 20 miles from both Winston-Salem and Greensboro.

Devin explains, “I chose High Point because it had everything I had wished for in a school. I knew it could challenge me both academically and athletically. When I met the coaches and players, I knew right away it was the place for me. The competitive nature of the team and their drive for success is something I look forward to being a part of.”

During the recruiting process, Devin was also considering Drexel, Bryant, VCU and Fresno State. Ultimately, she decided to follow in her brother’s footsteps (Joe Taulane HPU ’16) and compete for the Panthers alongside Blast 2019 teammate, Lindsey Barnes, in the Big South Conference (Winthrop, Liberty, Longwood, Campbell, Gardner-Webb, Radford and Presbyterian).