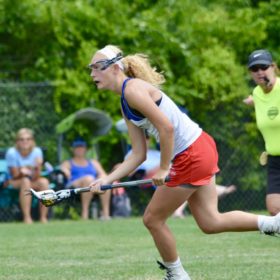 Congratulations to Blast 2020 and Episcopal Academy midfielder, Jayne Morley, on her commitment to the admissions process at Harvard University!

Harvard is located in Cambridge, Massachusetts and as a member of the Ivy League, the “Harvard Crimson” compete against Penn, Yale, Dartmouth, Princeton, Cornell, Brown, and Columbia. This past August (2018), former Ivy League standout, Devon Wills, was appointed the new Head Coach for Harvard Women’s Lacrosse program.

“I really chose Harvard because I always knew that I wanted to go to a school that would challenge me both academically and athletically. I wanted to be able to grow and learn as much as I could both on the field and off the field! I also always knew I wanted to go to college in a city and to somewhere different from where I grew up and Boston seemed like the perfect place!”

In addition to Harvard, Jayne was also considering Notre Dame, Boston University and Loyola. Her advice to younger Blast players beginning the recruiting process is “it can be a long and stressful process but take it all in because it’s your future you’re deciding! Play hard in every tournament and take every opportunity to show your skills from the very beginning to the last second of the game!”

Jayne joined Philly Blast in the Fall of 2012, just a few months after the program’s inaugural summer. “I have played Philly Blast since I first started playing club when I was in 5th grade and I could not imagine being the same person I am today without it! Josie and Julie have played such an important part in not only my lacrosse skills but also in my confidence and leadership skills. Philly Blast is about making girls who play lacrosse into good people as well as good players!” Outside of Philly Blast, Jayne has also competed at National Tournament (2016, 2017, 2018), at the Under Amour All-America games (2017, 2018) and for her Varsity Field Hockey program.