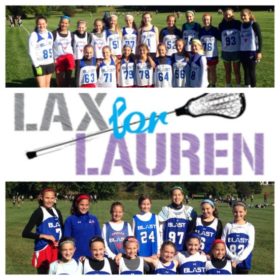 Philly Blast 2021 played Dynamite 2021, Methacton 2021, and Xtreme 2021 throughout the day. The game with Dynamite was extremely exciting – both teams moved the ball well in transition, played solid defense and finished on their shots. Against Methacton, the score was tight until the very end, when Blast pulled away to finish the game with a strong win.  Blast 21 fell short only to Xtreme, who proved to be a tremendous competitor. Grace D., Baileigh G. and Annabel L. anchored the defense, while Emma W. and Anna B. helped to spark the offense throughout the day. Congratulations on a GREAT day girls!

Philly Blast 2022/23 played four games throughout the day against the following teams: Filia 23, Xtreme 23, Xtreme 22, and Dynamite 23. Blast DOMINATED throughout the day everywhere on the field! They fell short only to Xtreme 22 by a few goals, leaving them with a 3-1 record on the day!!  Maia D. & Gia R. anchored the defense in every game: Maia protected the cage well, saving many shots and making amazing clears out past the restraining line and Gia communicated on every play, helping direct slides and double teams. Our midfield, which included Victoria T., Shea M., Alexa C. Emily L., Shannon W., and Sophia G., was incredibly impressive on the draw circle and with give & go’s in transition. The attacking unit, which included Kiley G., Gabby M., Sophia A., Katie R., and Emily F. scored an enormous amount of goals over the course of the day, averaging approximately 11 per game!

Who is Lauren?: Lax for Lauren tournament is run by Dynamite Lacrosse and supports the Cystic Fibrosis Foundation. Lauren is a fifth grader that started playing lacrosse in third grade. She also has Cystic Fibrosis. Cystic fibrosis is a life-threatening genetic disease that affects the lungs and digestive system of about 30,000 children and adults in the United States (70,000 worldwide). More than 10 million American are symptonless carriers of the defective CF gene. The disease occurs in one of every 3,500 live births of all Americans and about 1,000 new cases of CF are diagnosed each year. Right now there is no cure for cystic fibrosis. The Lax for Lauren Tournament donates money to the Cystic Fibrosis Foundation, the leading organization committed to finding new therapies and ultimately a cure for CF, and to improving the lives of those with the disease.