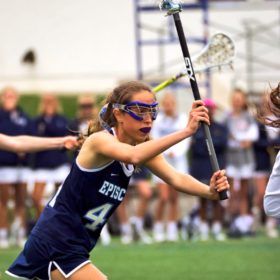 Congratulations to Philly Blast 2018 and Episcopal Academy defender, Phoebe Christos, on her verbal commitment to play Division I lacrosse for Villanova University in the Big East Conference!

Phoebe’s timeline was different than most of her school and club teammates who have committed to play Division I lacrosse. She encourages younger Blast players to “be patient…just because all of your friends are committing, it doesn’t mean that you have to. All you need to do is focus on working hard and making yourself better. Believe in yourself!”

During her college search, Phoebe was considering Boston University, the University of Pennsylvania, Tufts University, Trinity College and Wesleyan University. She ultimately decided on a familiar campus, right around the corner!

“I chose Villanova because of the amazing academics and awesome alumni network. I love the team, coaches, beautiful suburban campus and school spirit. Nova nation!!!”

In addition to playing lacrosse for Philly Blast 2018 and for Episcopal Academy (2016 PAISAA Champs), Phoebe competes on the varsity tennis team and the varsity indoor track team. She also serves as an officer for Model UN, the editor for Scholium (EA newspaper), a member of the Community Service Board and as a facilitator for the SpeakUp initiative.