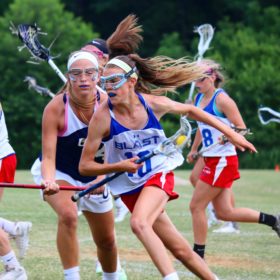 Congratulations to Philly Blast 2020 and Garnet Valley midfielder, Kathryn Toohey, on her verbal commitment to play Division I lacrosse for Penn State University!

Penn State finished the 2016 season ranked No. 4 after making it the final four in their fifth straight NCAA Tournament appearance under head coach Missy Doherty. The Big 10 powerhouse continues to hold a top national ranking this season after a strong start to their 2017 schedule.

“I love Penn State, the big campus atmosphere and it’s location in the mountains,” Kathryn explained. “PSU has been my dream school for a long time and I knew it could challenge me both athletically and academically. When I met the coaches and the team, I was sure it was the school for me. I loved the team’s chemistry and everyone’s determination to strive for greatness.”

In addition to Penn State, Kathryn was also considering Johns Hopkins, Loyola, Florida and Navy. She is the first Philly Blast 2020 player to make a verbal commitment in the recruiting process to a Division I school. Her advice to younger Blast players beginning the college recruiting process is to “keep an open mind about the process and the schools you visit. Try to visit as many schools as possible and don’t be afraid to get to know the players and coaches.”

Outside of competing on Philly Blast 2020 Blue, Kathryn has earned multiple All-Star selections at exposure camps, including Maximum Exposure and 3d Fall Freshmen. She was also one of four 2020s selected to represent the Philadelphia region on the 2016 Under Armour All-America Underclassmen team.